A brain injury survivor’s open letter to MPs urging them to back the Acquired Brain Injury Bill.

I felt enormous self-worth through returning to an employed status and going on to make contributions of personal taxation and national insurance. 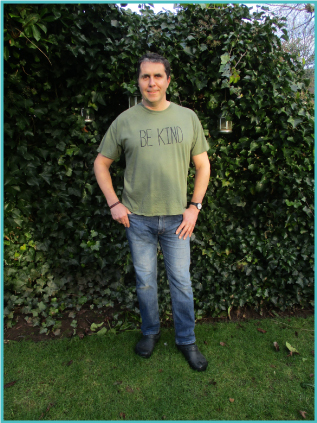 A severe head injury in a collision between his bicycle and a car travelling at 40mph brought David Wozny's high-flying IT career to an abrupt end. He was 45.

The Staffordshire dad-of-one spent the next month in hospital in a coma and a further week, despite regaining consciousness, experiencing locked-in syndrome.

When he was eventually transferred to an NHS rehabilitation centre, it was the beginning of a prolonged road to recovery that, six years on, he is still bravely travelling.

Now, as the House of Commons prepares to vote on the Acquired Brain Injury Bill - which calls for a national neurorehabilitation strategy - David has written a rallying open letter...

To all MPs in Parliament,

As someone with personal experience of an acquired brain injury, I wish to endorse the ABI Bill. I offer a little insight here into why I see it as a potential win-win outcome for the patient and the 'public sector purse.'

At the time of my traumatic brain injury (TBI), I was a successful IT security consultant, undertaking substantial roles in both the public and private sectors.

I'd always been a self-sufficient individual who never imagined relying upon income benefits and third-party health support services.

Following hospital discharge three months after my TBI, I went through an 18-month period of 'righting myself' to the extent that I could consider returning to my previous occupational role.

During this time, I received private sector access to occupational therapists, psychologists, physiotherapists, and speech and language therapists.

This access was funded by the third-party insurance of the driver of the car that collided with me.

I'd had fantastic clinical support via the NHS but found that, beyond the hospital stage, I'd have struggled to make the progress I did if I'd been purely reliant on the existing public sector services.

I sometimes ponder what my outcome would have been in the event of not having the good fortune of benefitting from third-party insurance cover.

Apart from my personally very beneficial outcome, I was able to detach myself from being an individual needing various income benefits.

I felt enormous self-worth through returning to an employed status and going on to make contributions of personal taxation and national insurance. This is a major part of what I view as my win-win outcome.

I endorse the ABI Bill in the hope that it can help give others the opportunities that I was able to benefit from. I dearly hope that you will also do so.

Support for Rhondda MP Chris Bryant's ABI Bill has been gathering speed in the brain injury community, with thumbs up from Headway, the UK Acquired Brain Injury Forum (UKABIF), the Child Brain Injury Trust, The Children's Trust, and The Disabilities Trust.

And Brain and Spine Foundation CEO, Marc Smith is also a firm backer. "I am a big supporter of Chris and the ABI Bill," he confirmed.

"It's about time that the Government committed to a holistic approach to looking after one of the most significant, but largely invisible Public Health issues and one that affects so many of our society," he added.

"The ABI Bill, in trying to secure a commitment to a strategic plan as a first step, will get the ball rolling in the right direction and will be a big stride towards the possibility of a national plan for neurology too."

The second reading of the bill is in the House of Commons on the 3rd of December, 2021. More details here: ABI Bill needs you!

I very clearly recall placing my hands at about shoulder-width apart upon the sink in my room while looking at my reflection in the mirror. I recognised the face as my own, but I didn't feel at all like me.

David Wozny is a member of After Trauma, a patient and public involvement group (PPI) hosted by Barts Centre for Trauma Sciences in London.

He has also contributed to Headway – the brain injury association resources and has shared his story widely to inspire other brain injury survivors.

Where do you go for help with a brain injury when there are no specialists by your side? Here's Michelle's story – in the hope all MPs will back the Acquired Brain Injury Bill…

As a UK study of autistic people is paused for an ethics probe, we look at the role of neuro OTs in supporting the autism community.