He’s the ‘stuffing’ that dreams are made of for spinal injured Carrie - Turkey the lurcher; rescue pound hound turned therapy hero!

Carrie, 22, rescued Turkey, 3, from a dog shelter just 8 months after a motorbike accident that left her with severe spinal injuries and her twin sister, Jess concussed.

In the year that followed, and with support from Carrie’s Krysalis Neuro OT, she and Turkey set out on a joint mission to set fresh goals for a new future.

We’ll be charting their progress in a series of blogs next year but, in honour of his recent graduation from pet therapy training school, Carrie reveals:

How I met my Turkey!

Well, where do I start? Turkey is such a wonderful friend and companion.

When I first saw him at the rescue shelter, I had seen two other dogs before him and they were gorgeous.

However, none of them really gave me ‘that’ feeling; the feeling that is so often described by people who have rescued dogs.

He’d nudge me with his head as if to say, 'Mum, I’m here. Focus on me and it will all fade away'

Turkey came into the enclosed field and, initially, I was taken aback by his sheer lack of weight.

His hip points were clearly visible, and all his ribs were showing. I immediately felt my heart jut out of my chest, and I had to stop myself from getting emotional at the sight of this dog who was so clearly in need of some love.

Despite his obvious lack of care, he was so welcoming. He didn’t care about my crutches whereas the two dogs I saw beforehand were very apprehensive of them.

All Turkey wanted was a belly scratch!

I gave him lots of fuss, and then threw a stuffed bear for him. He ran around with it and eventually dropped it, and then went mad, racing around the field!

Seeing this really struck a chord with me as he was at a disadvantage health wise and had clearly been abused, and yet he was so happy just to…be.

He was happy to be where he was, and thankful for the people who saved him. This resonated with me as I wasn’t in a good place emotionally at that point in my life.

Turkey displays amazing abilities to sense when people need affection. If anyone is ever upset while he’s around, he tries his best to remedy the situation by being extremely goofy!

He also senses whenever I’m having a bad day. He knows when I’m in pain as he will come over to me and rest his head on my knee, being ever so gentle as he does. 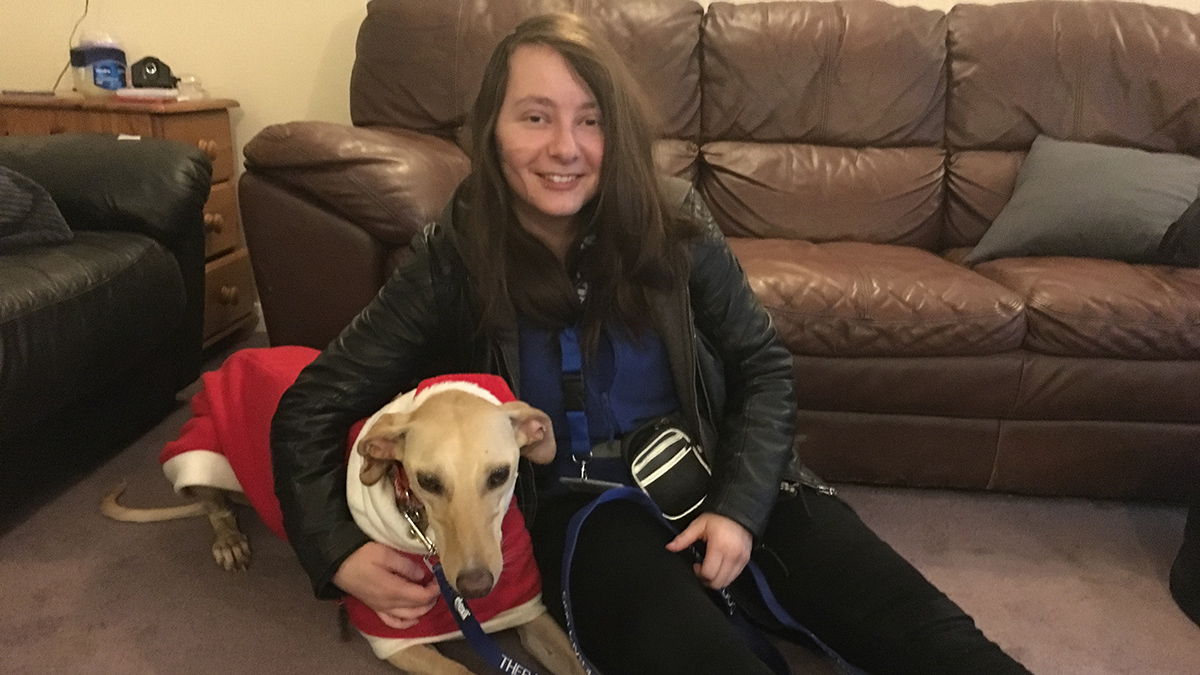 He follows me closely too when I get up and go anywhere, as if he is making sure I get there safely - even if it’s just to the kitchen!

My friends and family have all said how Turkey never takes his eyes off me, even when we’re watching tv.

He will keep one eye on me all the time and the minute I get up, he’s right there with me.

I started taking him out to different places and socialising him, and noticed I was much more confident and much less anxious when I had Turkey with me.

I suffer with Post Traumatic Stress Disorder (PTSD) and panic attacks associated with my accident, and Turkey knows when I am having a bad day, be it with anxiety or pain.

The most poignant time for me was when we were eating at a restaurant. I was in my wheelchair and there were lots of people in close proximity.

This was making me anxious and Turkey seemed to notice because he got up and started insisting that I fuss him.

Whenever I stopped, he’d nudge me with his head as if to say, “Mum, I’m here. Focus on me and it will all fade away.” This was most certainly the case.

In doing that he had ‘grounded’ me and made me feel much more confident and relaxed. He’s the most fantastic dog I’ve ever had the pleasure of knowing.

I describe Turkey as my best friend because he absolutely is just that. He seems to understand when I talk to him and is there for me, come rain or shine, wind or snow.

Turkey trained to become a therapy dog with Canine Concern. It’s an amazing charity and it’s such a privilege to be able to work with Turkey now to help other people who may be feeling the way I once did before I got him.

He really is one in a million, and everyone who meets him has fallen head over heels in love with him. I can’t begin to explain how he’s helped me. He’s my absolute world.!

I hope in reading this, others will be inspired to adopt a rescue dog. They really do change our lives.

In this #TalkingHeads article we introduce you to Rebecca - a brain injury survivor whose dog Teddy is another pet Therapy hero.

Our conversation begins by talking about an up and coming adaptation of ‘The Wizard of Oz’. Rebecca explains the production is being put on over the Christmas period by the local amateur dramatic association, of which she is a member.

She is pleased to tell me that she is taking the role of the leading lady, Dorothy, and in many ways this casting is more than appropriate. Like Dorothy, Rebecca is compassionate and courageous. Throughout the course of the morning she displayed her vulnerabilities and fears relating to the challenges she has faced but is calmly determined to overcome them.

Rebecca’s journey has not been an easy one. She sustained a birth related brain trauma, contracting meningitis and subsequently hydrocephalus as a baby. This resulted in physical disabilities and affected her executive, decision-making and communication skills, and her balance. . ,

*Turkey was rescued by https://www.margaretgreenanimalrescue.org.uk/ and trained as a therapy dog to assist vulnerable and elderly people by https://canineconcern.co.uk/